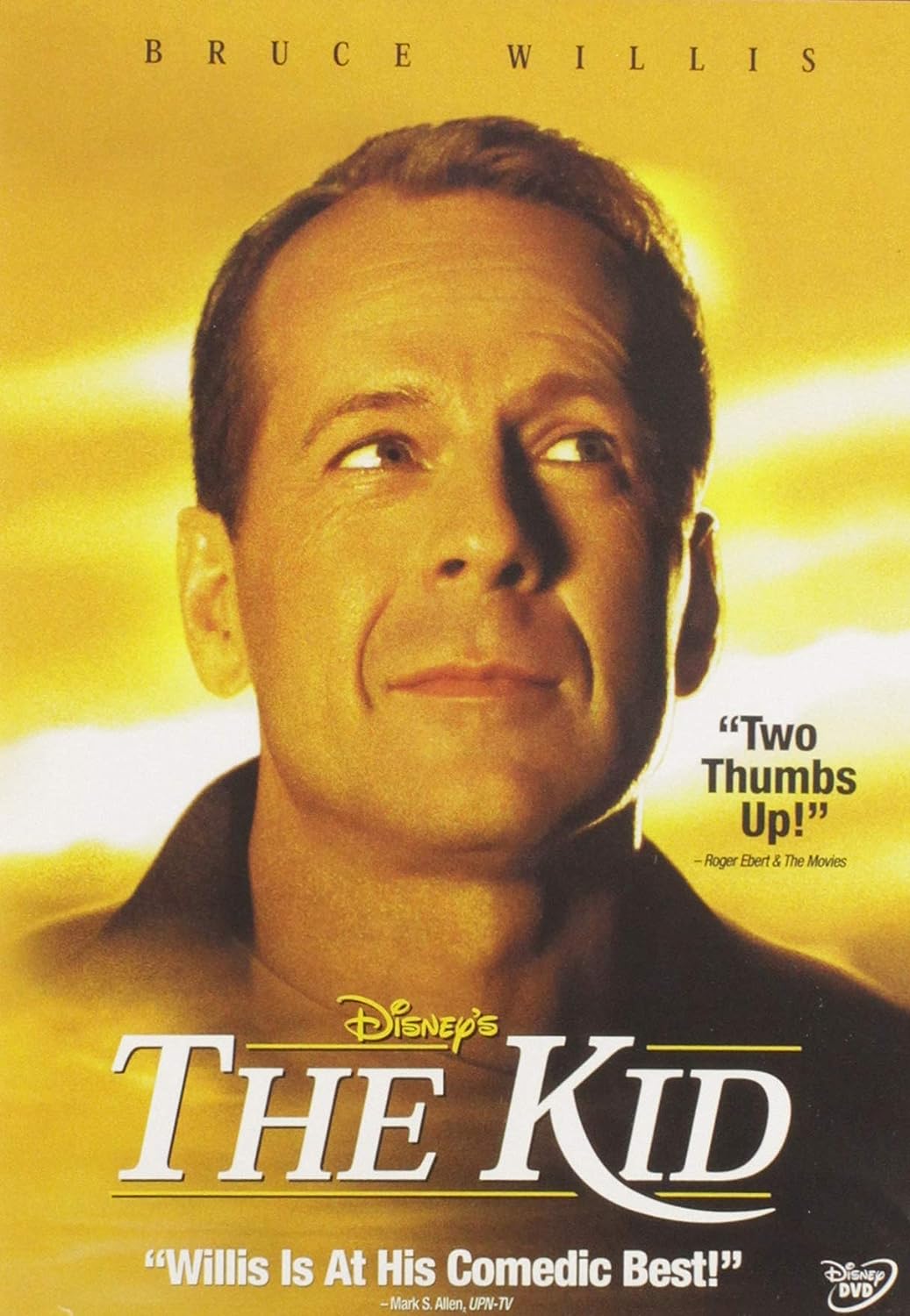 International superstar Bruce Willis (UNBREAKABLE, THE SIXTH SENSE), along with Lily Tomlin (9 TO 5, TEA WITH MUSSOLINI), Emily Mortimer (SCREAM 3, NOTTING HILL), and newcomer Spencer Breslin star in the hilarious and heartwarming comedy DISNEY'S THE KID. Successful, high-powered Russ Duritz (Willis) has spent all of his incredibly empty life forgetting the child he used to be -- until one day, he meets him face-to-face! Thinking this kid is a hallucination, Russ does everything he can to make him go away. But 8-year-old Rusty (Breslin), who's anything but happy that he grows up to be a loser without real meaning in his life, can't leave -- at least not yet. At once funny and charming, DISNEY'S THE KID is a magical comedy that's filled with adult-sized laughs.|Screenwriter Audrey Wells says she knew immediately when she saw Spencer Breslin that he was the perfect kid. "The kid spoke five words, and they weren't even words in the script, he just walked on stage and said 'hello' and I knew he was the one," says Wells.|"I was in the frozen food section of a supermarket when my mom told me I got the part," says the movie's young star, Spencer Breslin. "I couldn't believe it! I just started screaming, 'I'm going to be in a Bruce Willis movie!' People must have thought I was crazy, but I didn't care!"

Russ Duritz (Bruce Willis) is an ultracynical, 40-year-old L.A. image consultant who fashions bogus façades for scumbag clients. Oblivious to his own need for a makeover, he's a tyrant in the office (to the chagrin of his sarcastic assistant, played to perfection by Lily Tomlin), and he's emotionally unavailable to the morally centered woman (Emily Mortimer) who senses goodness beneath Russ's hardened veneer. Not a moment too soon, a pudgy kid (Spencer Breslin) mysteriously appears in Russ's life, revealing himself to be Rusty Duritz--that is, Russ's 8-year-old self, arriving by some magic to put the adult Russ's life into beneficial perspective. This variation on A Christmas Carol has Rusty guiding Russ on a tour of his past to reveal how he became a loveless, hard-shelled loser. It takes a bit of smarmy chicken-soup psychology to explain it all, but The Kid is an otherwise charming and involving fantasy, suggesting that perhaps we'd all benefit from a bit of counseling by our younger selves. Written with admirable restraint by Audrey Wells (who brought a similar appeal to "i"The Truth About Cats and Dogs) and directed by Jon Turteltaub ("i"Cool Runnings), the movie doesn't force its supernatural elements or attempt to explain Rusty's existence. It's just a fable for our modern age and a reminder to embrace the better angels of our nature. Delivered with an easy blend of humor and sentiment, that message makes The Kid an unexpected pleasure. (Look closely for Matthew Perry as Willis's shaggy-haired client.) "i"--Jeff Shannon

Spencer Breslin may not steal every scene he's in as the title role of The Kid, but he does steal every bit of the hilarious commentary on the DVD. The extras focus on young Breslin, first with a 20-minute featurette with behind-the scenes footage of Spencer from his casting to the film's wrap. The witty and playful director Jon Turteltaub reverses an old axiom stating he loves working with kids, especially Spencer. He illustrates this--and Spencer's unabashed enthusiasm--by sharing the commentary duties with him, and the result is a 108-minute record that's funnier than the film. Spencer asks questions out of the blue ("Jon, does my DVD player come with a remote?"), repeats Turteltaub's technical information with perfect irony, embarrasses the director on continuity errors, and munches on an occasional pickle. For anyone who falls for Spencer's charms in the film (it's hard not to), the DVD commentary is a must, and a new standard in laughs per commentary. --Doug Thomas

Switch to the dark mode that's kinder on your eyes at night time.

Switch to the light mode that's kinder on your eyes at day time.

Switch to the dark mode that's kinder on your eyes at night time.

Switch to the light mode that's kinder on your eyes at day time.

Back to Top
Close